Uganda is rightly known for its gorillas. Rightly because its Mountain Gorillas are extraordinary, not only for themselves but also for the fact that they have survived decades of poaching and climate change. They are beautiful and critically endangered.

However, Uganda is also a go-to travel destination because of its chimpanzees. These creatures are magniicent to watch because of their cleverness. We humans share up to 98% of our DNA with them. 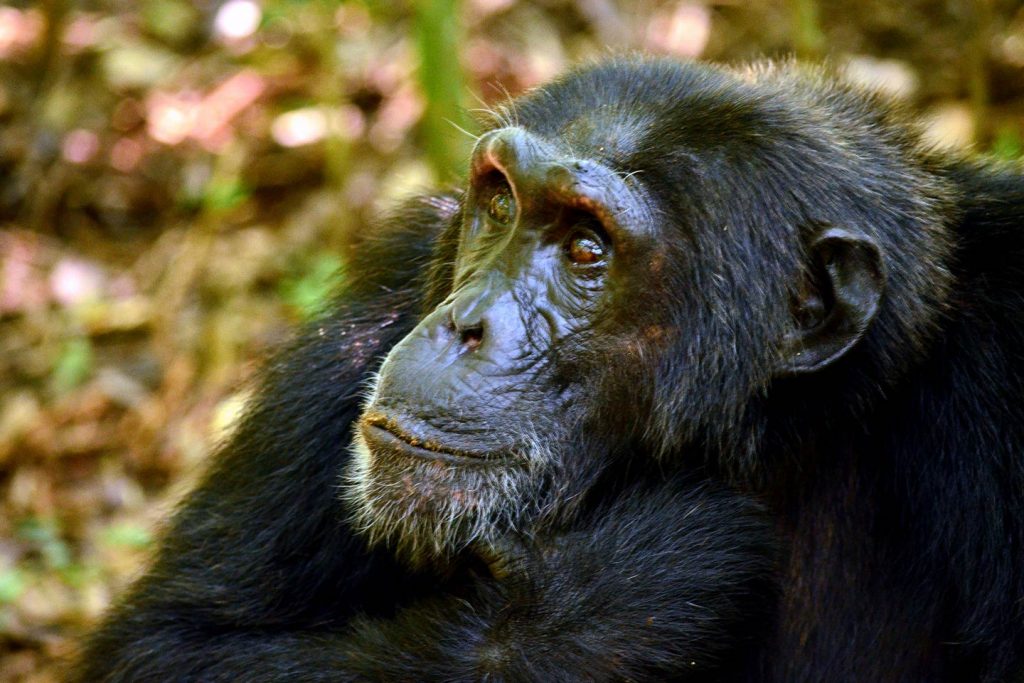 They are among our closest relatives, sharing over 98% of our DNA.  Living in family groups of 15 to 20, each chimpanzee group has a personality of its own and seeing them in the wild is everything from humorous to awe inspiring.

Opportunities for observing chimpanzees in the wild in Africa range from tracking unhabituated chimps in Nyungwe Forest or Volcanoes National Park in Rwanda, to visiting habituated and often long-studied groups in Kibale National Park in Uganda and the Mahale Mountains of western Tanzania. Although chimp sightings are not guaranteed, the odds of seeing them are still good, especially with habituated groups. The odds are also good that you will see other primates during your hike, including the grey-cheeked managebey and the red-tailed or golden monkey (depending on where you are).

In addition, while you explore deep into lush green forests, these treks are generally less strenuous than hiking to find mountain gorillas. You also have the option to visit one of several chimpanzee sanctuaries, including Ngamba Island in Uganda and Sweetwaters in Kenya. In this space our interests concentrate on chimpanzee trekking in Uganda, mainly Kibale Forest National park.

When you visit Kibale Forest National Park, home to over 1,500 chimpanzees, we recommend you spend a week tracking habituated sections of its giant and growing population of chimpanzee but a day with these impressive creatures is good enough to spur up the adventure in you. Book in at the lovely Ndali Lodge and explore both full and half day tracking options – though opting for the former is more fascinating.

On first observations? My word, they’re loud – and incredibly sociable. They observe a seriously intricate range of rules and social niceties. The fact that they are habituated means they are both wild and yet relaxed in human company, making Kibale-based scientific findings an important contribution to humans understanding of the chimpanzee. They move, and you’re are able to move with them. Once sat still, watching them, I feel immediately in the present. I think of nothing else. And while I am perfectly aware that I am sitting with wild animals, animals that hunt monkey with terrifying intelligence, I feel perfectly safe. It feels right to be here with them. Just right.

The Price of Chimpanzee Trekking in Uganda

You can track chimps in Uganda and spend an hour in their presence (similar to gorilla trekking) for 150 USD, but there’s another, more intimate and immersive option. For 220 USD, the Chimpanzee Habituation Experience (CHEX) takes you on a fascinating adventure in small groups with our closest living relatives through Kibale Forest National Park from the break of dawn until 7:00pm — or until your feet say so.

It’s a unique, all-day trek and there’s no telling where the chimpanzees will lead you. Their movements are unpredictable —whether it’s uphill, downhill or on even ground, you follow the agile group, sometimes at challenging speeds through dense vegetation, for rare, up-close encounters. 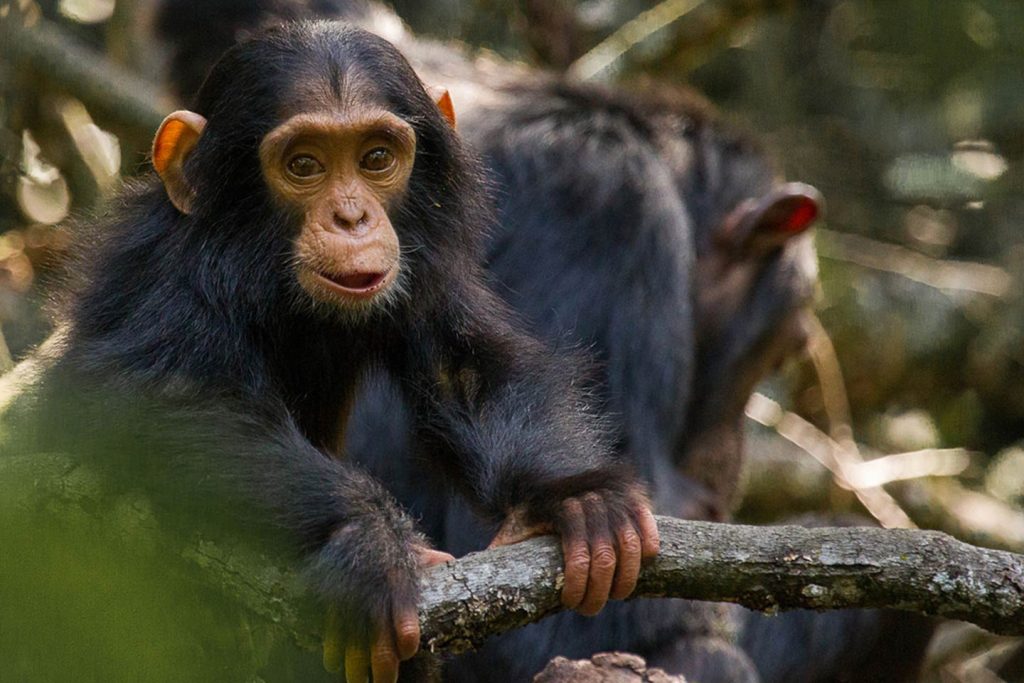 Kibale, a tropical forest of varying altitudes in southern Uganda, is home to 1,500 chimps, the highest concentration in Uganda, as well as the most diverse (13 species in total) and densest population of primates in East Africa. Vervet monkeys, olive baboons and red colobus monkeys are also found in these woodlands, making the forest a primate-lover’s dream. And, with 350 species of birdlife, Kibale will satisfy bird enthusiasts too. 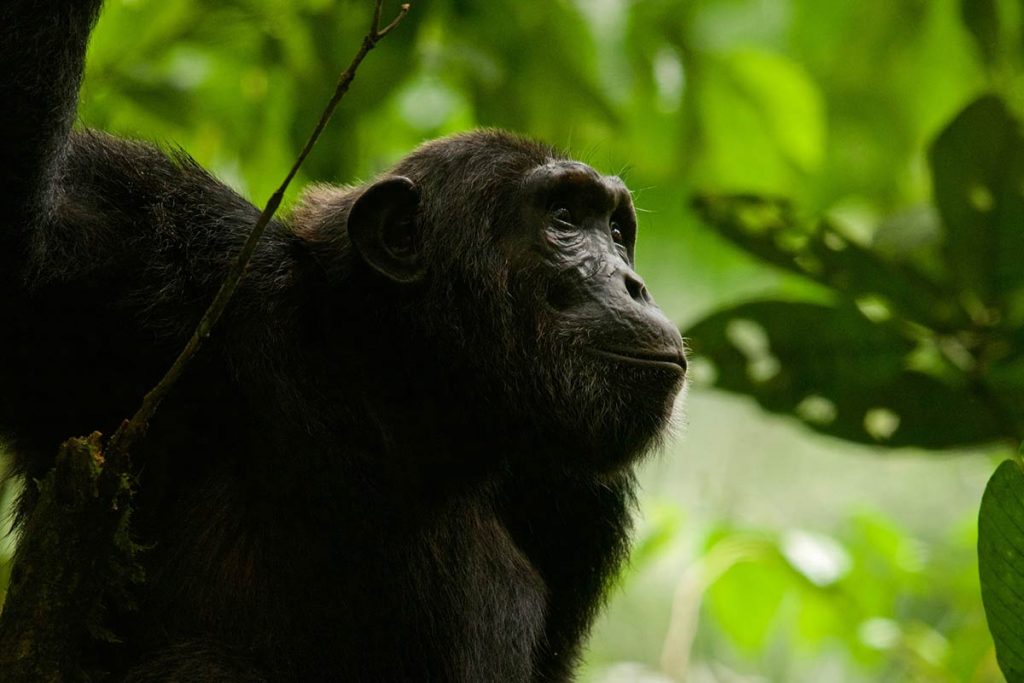 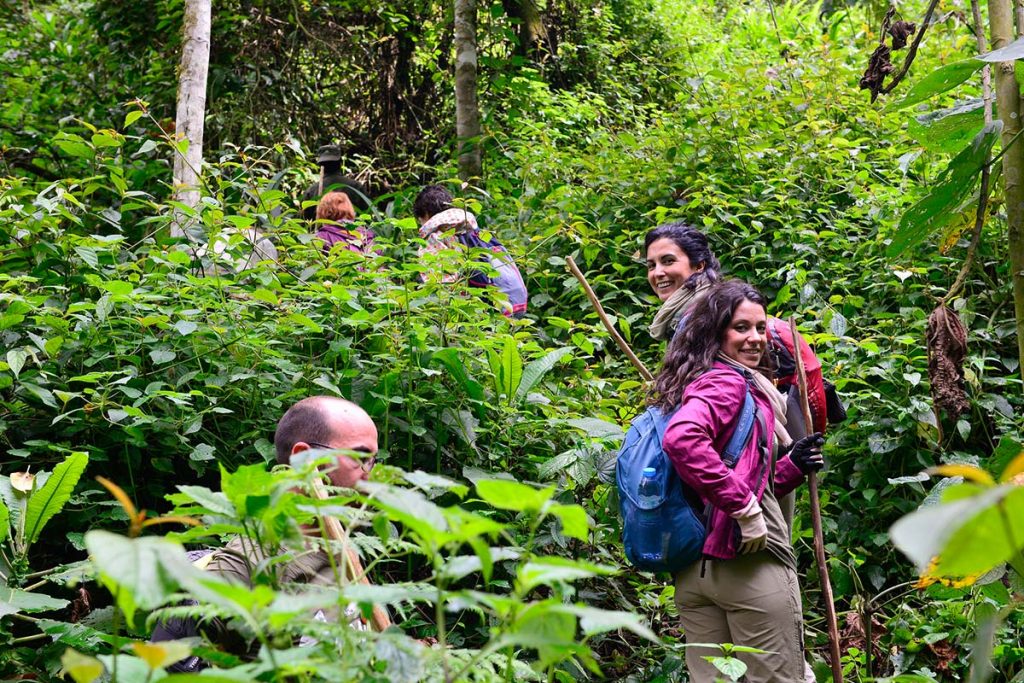 With packed lunches from your hotel, you arrive at the park, maybe groggy-eyed, at 6:00am. Your group of trekkers ready to walk the forest floor with protection from a Uganda Wildlife Authority ranger, armed with a Russian AK-47 comfortably hanging over his shoulder, you’re given the lowdown:

His firearm isn’t for the chimps. Instead, rangers shoot it into the air to fend off aggressive elephants and buffalo because, in the rainforest, they’re not used to human company as they are in savannah parks.

Habituation, the process by which wild animals become accustomed to the presence of humans, can take up to two years for chimpanzees. Three habituated communities are found in Kibale: two for research and one for visitors.

Distance must be kept between us and the wildlife.

Loud talking, eating near the chimpanzees, littering, flash photography and monkey imitations are not allowed.
By the end of the briefing, you’re eager to get moving. 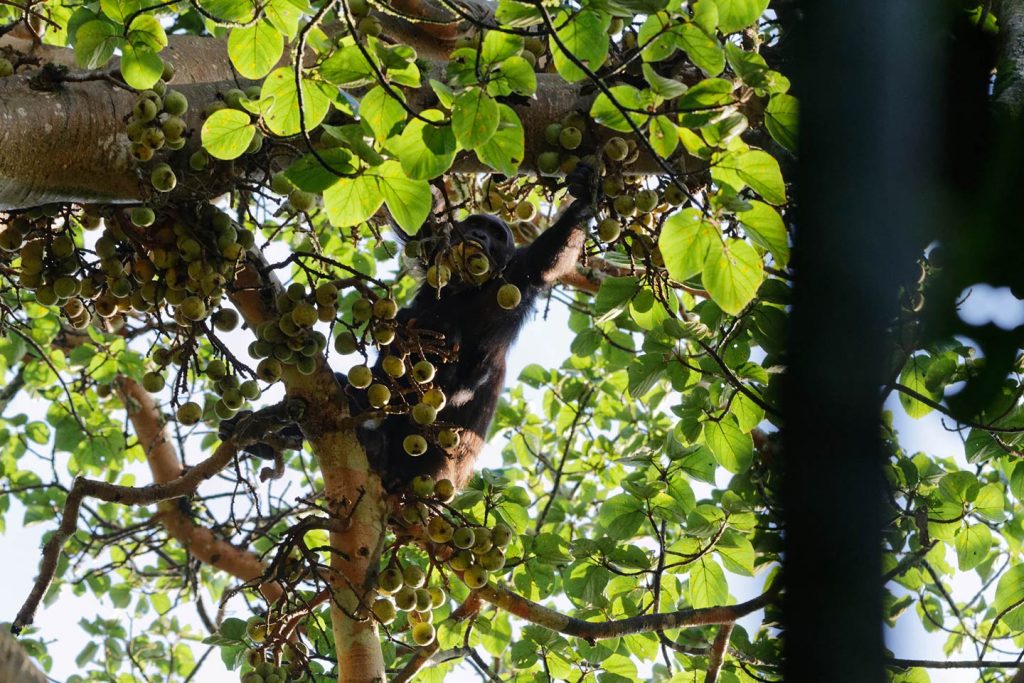 It’s a typical day for this group of 20 or so great apes. They build their nests in a different location each night and, by morning, they can be seen foraging and noshing on figs. As you moved in closer to the chimps group, beware of the falling fruit, figs dropping on the forest floor around you and of getting caught in a rainfall of nasty chimp urine.

It could take some time for the troop to finally descend from their nocturnal nests but that’s an unusually late start to their day. Tracking chimpanzees requires patience, and good things come to those who wait.

The reward? The extraordinary opportunity to observe a whole spectrum of their natural behaviours: Babies as young as eight months old clumsily swinging from the tree tops, the social “Mr. Black” relaxing on the forest bed with arms folded behind his head, and an intimate grooming session (a form of primate social bonding) between two males. Some of them, especially males, have lost their limbs or an eye in a competitive clash with another male chimp.

And these chimpanzees are a raucous bunch. Every now and then, the stillness of the forest is abruptly broken by mayhem, an alarming, deafening cacophony of hoots and shrieks between one community and another in the distance which could be signs of conflict or discipline according to researchers.

Quick-footed and erratic, chimpanzees can be difficult to keep up with. By mid-afternoon, you’re exhausted from a hike that increases in intensity as you race through the forest up hills and through mud, pausing only when the chimps chose to rest.

But then you spot something remarkable, an eerie reminder of how quickly these primates can transform themselves into savage hunters. Clinging to a tree a male and, hanging from its mouth, its recent kill: the carcass of a small antelope. It’s a rare sighting though captivating and astonishing. Chimpanzees are known to occasionally hunt smaller animals, including other primates according to researchers. 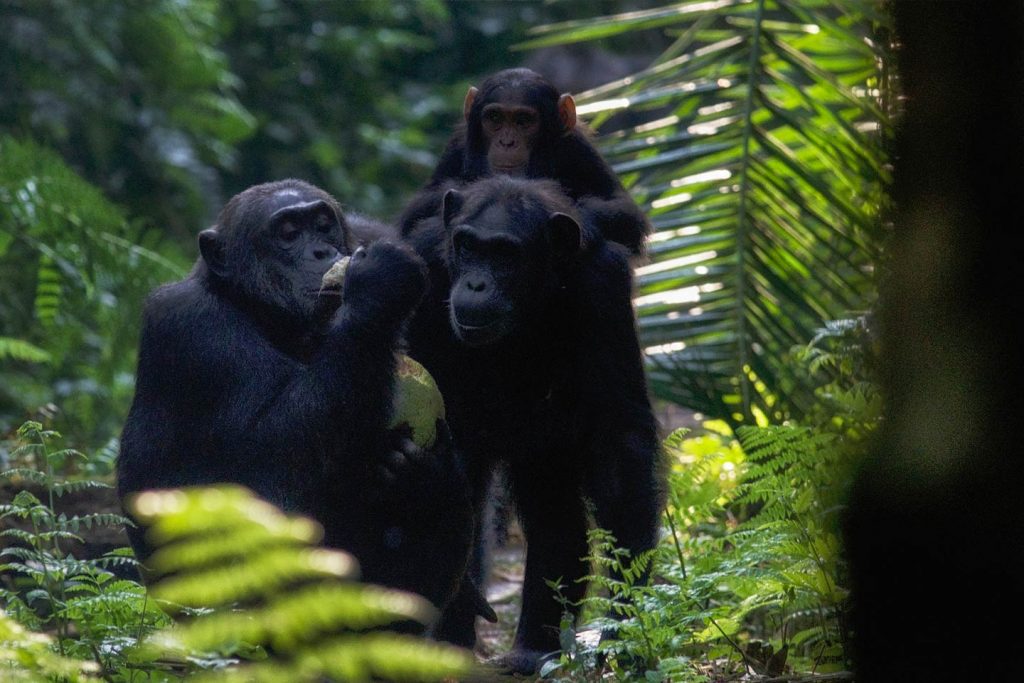 As you observe the chimp carrying a piece of the kill, others beg from the ground. All eyes on the seemingly smug hunter, including those of this male who plonk themselves down next to him on a tree limb, patiently lingering in the hopes of an offering. At one point, in a human-like, charitable gesture, the hunter extends his arm to the face of his mooching peer, grabbing his chin between his fingers as if to say, “stick around, my friend, and just maybe I’ll throw you a scrap.” It’s like observing children in a kindergarten classroom grasp the delicate art of sharing. It’s, no doubt, the highlight of your adventure. I’m certain you would miss out on these rarely seen interactions if you opted for the one-hour chimpanzee trekking in Uganda.

This whole adventure experience can take you close to 6 1/2 hours in the forest, exhausted yet thrilled, you head back to your hotel. And what a day it is.

Where else in Uganda can you chimp trek?

In Uganda you can see them in Murchison Falls National Park and at Kyambura Gorge but Kibale is widely regarded as the best place in Uganda to see them.

You can go chimp trekking in Tanzania at Gombe (where Jane Goodall did her research) and in the Mahale Mountains. The Mahale Mountains are great because you can stay at Greystoke Mahale on Lake Tanganyika and these particular chimps spend quite a bit of time on the forest floor which is unusual and makes them easier to spot. 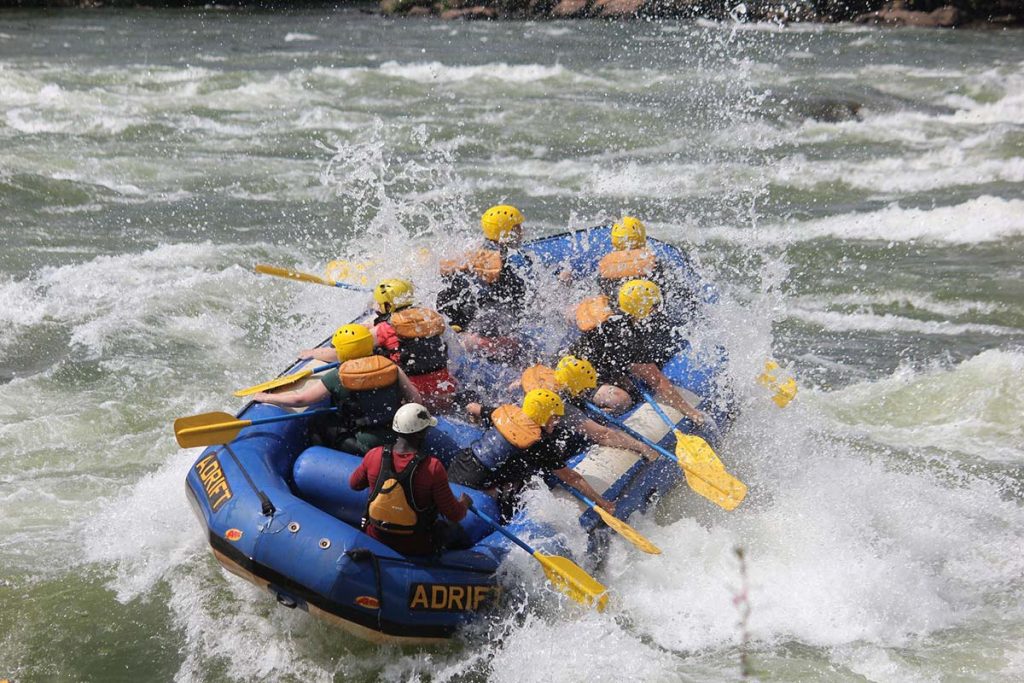 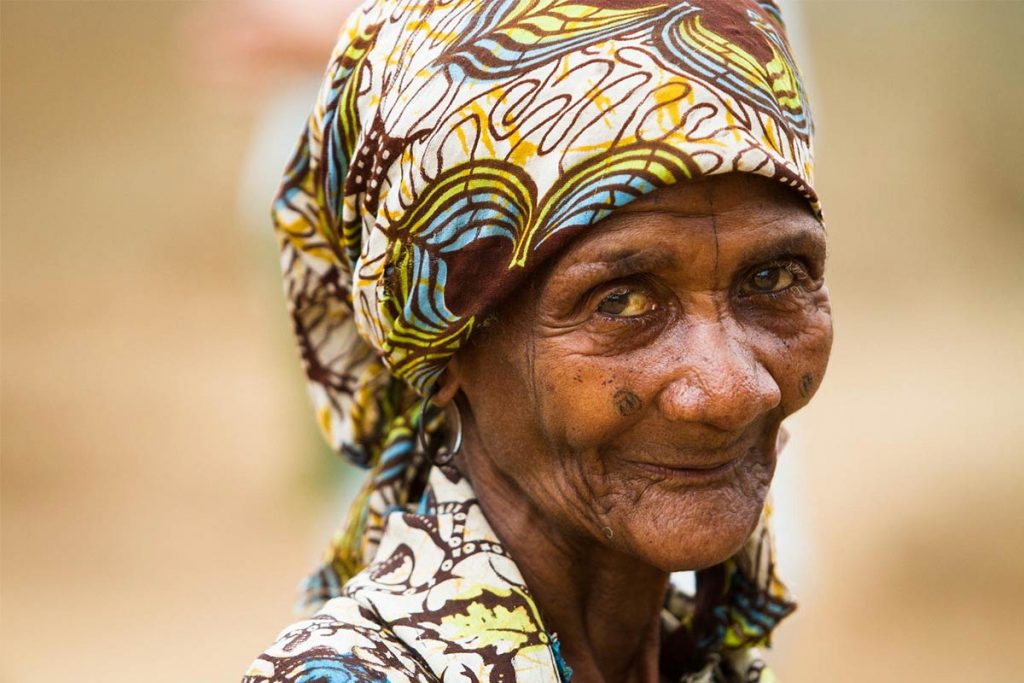