Home of the Primates 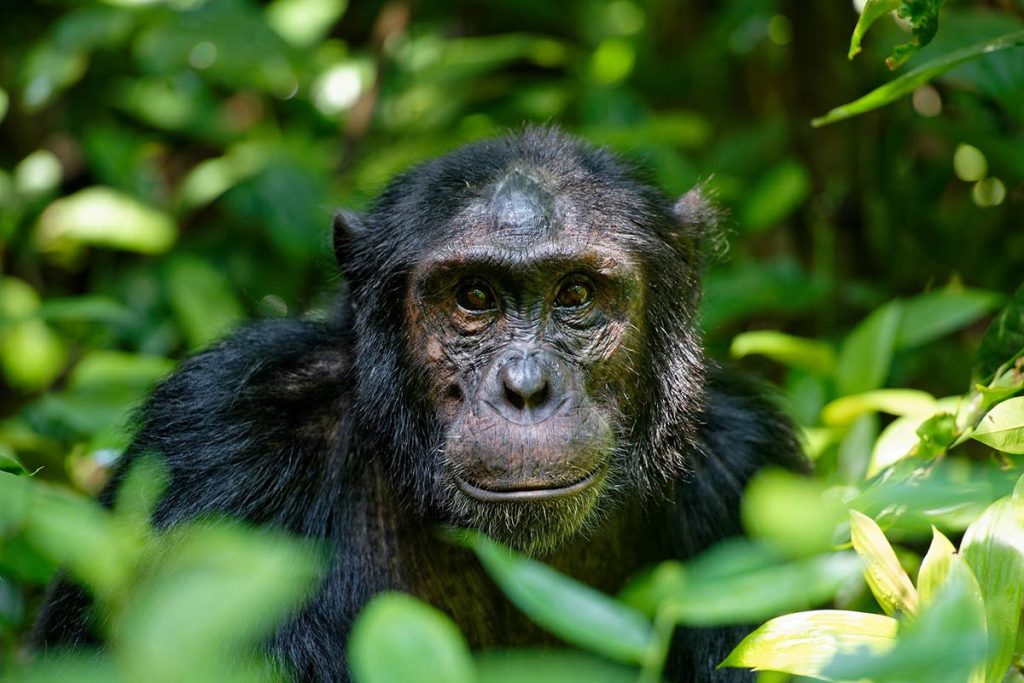 Nyungwe  Forest National Park is one of the reasons Rwanda has become the top tourism Destinations due to its bravura natural beauty and unique features. Nyungwe Forest National Park is strategically located in Rwanda and is among Africa’s vast finest Forests with different species of trees, wildlife mammals including primates as well as birds of the air with the most prominent primates found here being the rare chimpanzees.

Nyungwe Forest covers an area of over 1000 sq. kilometers and it extends into Burundi in Kibira National park and is also located near Cyangugu town, about 225km and a 4-5-hour drive from Kigali. Other primates can also be spotted like the various species of monkeys and bird species.

Nyungwe Forest National Park is found in the South Western part of Rwanda and it is bordered by the Rwanda-Burundi border in the South. Lake Kivu and the Democratic Republic of Congo lie on the west side of the park at an elevation of 1600-2950m above sea level and it serves as Rwanda’s largest water catchment area which also feeds the river Congo and the River Nile with water with the forest canopy walk, which is the only one in East Africa offering you the chances for birding, the primate tracking and viewing of the many butterflies.

Nyugwe Forest National Park is one of the oldest tremendous mountain rainforests that has been green since the days of the ice age. The park is a habitat to the habituated chimpanzees and other 12 primates with 400 strong troops of habituated Ruwenzori Black & White Colobus.

The park is a very good and prominent birder’s paradise with more than 300 different bird species including 16 endemics and 75 different species of mammals.
The park also includes the exciting canopy walk which involves walking at the top of gingatic trees from one point to the other across. While taking on this walk, you will spot different other primates like the golden monkeys, Colobus monkeys, black & white Colobus monkeys. 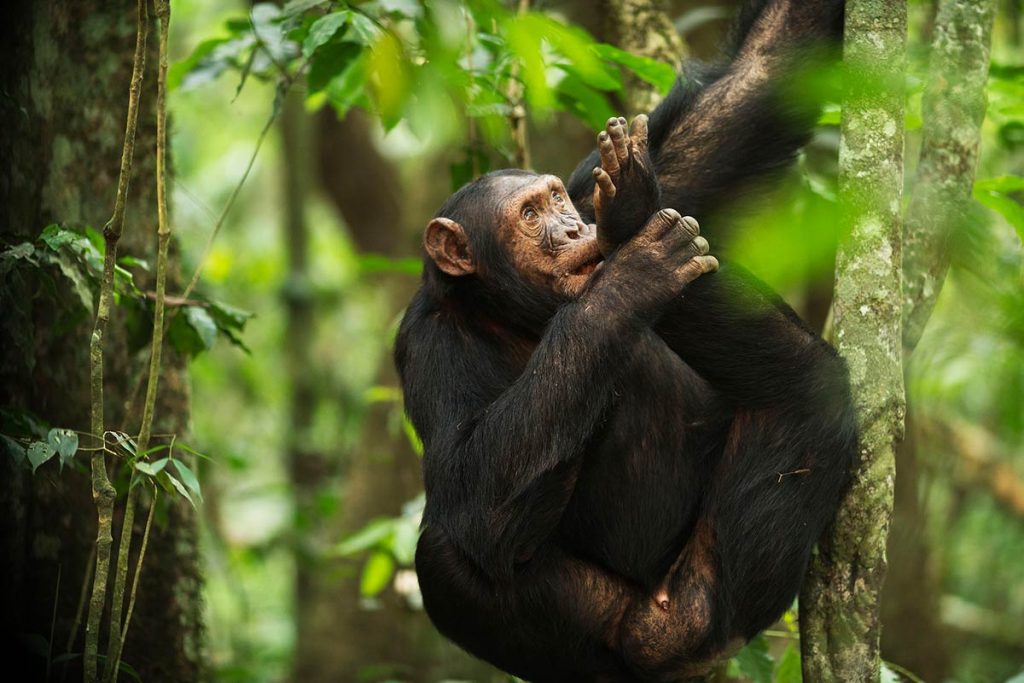 Nyungwe Forest National Park has  a variety of amazing views to offer every vistor according to their interests starting from the orchids to the primates during your birding walks with in Nyungwe Forest and many more as indicated below. 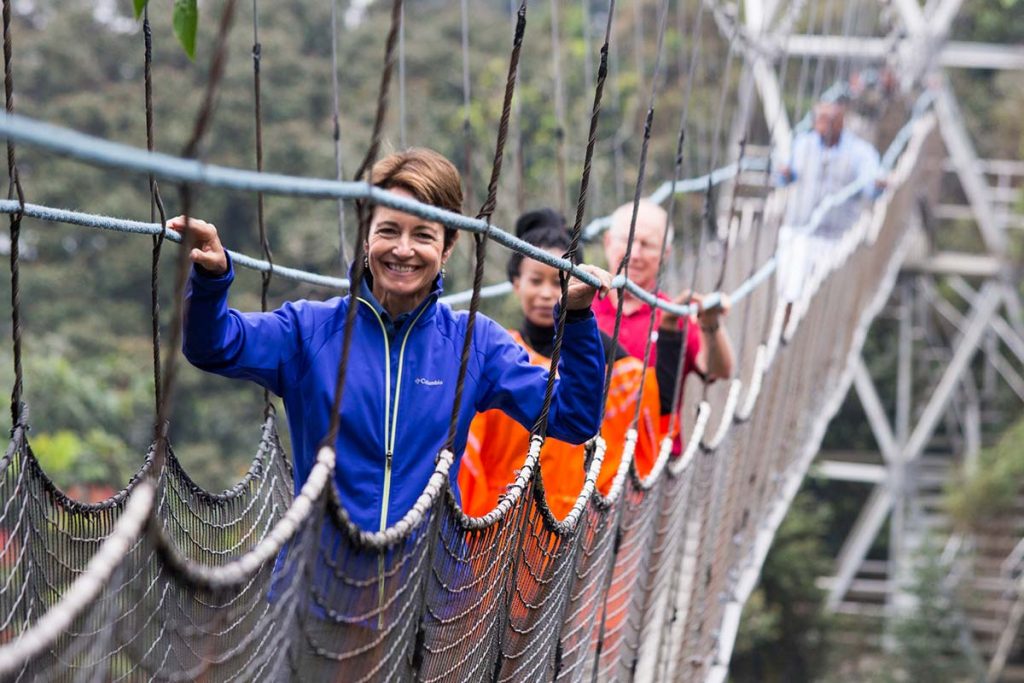 The Nyungwe Forest National Park canopy walk is also the first tree top forest canopy walk in East Africa and the third in all Africa and it is a must do on your visit to Rwanda. The canopy walk is 90 m long and 50 meters above the ground and is in dizzying heights for some people, you will see the monkeys move around in the tree tops, the birds that are flying above you and below you and a beautiful view of the huge Nyungwe forest. 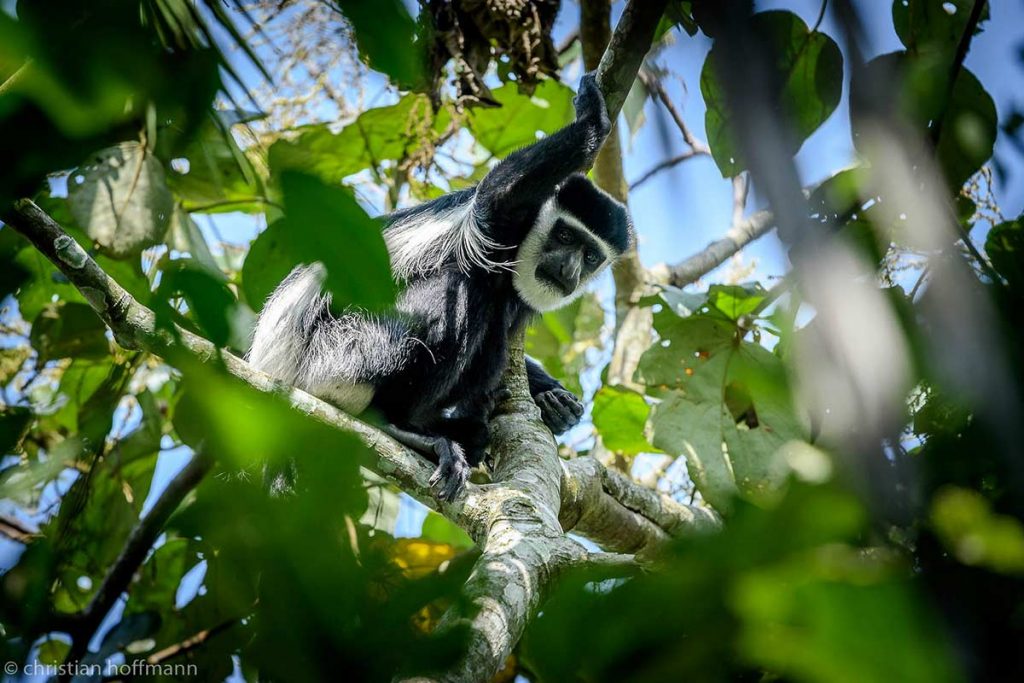 There are large troops of black and white colobus monkeys residing in Nyungwe Forest. These primates often travel in groups of over 300 individuals. IWalking through a montane rainforest and being surrounded on all levels by these active and cheeky monkeys is not to be missed.

The visitors can also spend days to a week hiking through the many trails in Nyungwe Forest National Park as they explore the ancient rainforest discovering many habitants found in the forest including, its wildlife, birds, primates, plants, flowers, butterflies and the trees. The trails are as below:
•Coloured Trails
These were formed in the early years when they were attempting to develop tourism in here are seven trails through the forest each marked by a particular colour. The trails range in length from the 1km Grey trail to the 10km Red trail. All the trails are well-maintained and offer the chance to see a diversity of primate and bird species.
•Waterfall Trail
This trail takes between 3-6 hours and it is a very pleasant walk through the tree-fern covered ravines, across several bubbling streams until you reach a pretty waterfall. Monkeys are often seen along the way and the steep slopes allow for good views into the canopy. This trail the best for birding enthusiasts as it is very rewarding for true forest interior birds.
•Kamiranzoru Trail
This trail is different from the other forest walks because it takes you through the low laying marshy areas which are rich in orchids and localised swamp associated bird species and it is 4km and takes about 3 hours.
•Bigugu Trail
This is the toughest trail and you need to be relatively fit as it leads you up the Bigugu peak. The Bigugu peak is 2,950m high and is the highest point in Nyungwe Forest, offering fantastic views of the landscape.

Accommodation in Nyungwe Forest National Park carters for all visitors from the low budget to the high end clients and some of the lodges include;

Nyungwe House is luxury accommodation situated lies in a beautiful location on the edge of Nyungwe Forest National Park, in south-west Rwanda

Gisakura Guest House is comfortable accommodation for people working within smaller budgets and it is found 2 km from the park near the Gisakura tea estate. It also offers opportunities to visit chimpanzees, the canopy walkway, bird watching, and hikes along different trails.

Nyungwe Top View Hotel is a hotel on top of a steep hill with views across numerous tea plantations; it has easily the most beautiful views in the Nyungwe Forest area. With its proximity to the headquarters of Nyungwe Forest National Park, it is a good base for trekking to see the chimpanzees and exploring the forest.

How to get to Nyungwe National Park

Nyungwe Forest National Park has two options of getting how visitors can get to it and they include:

Nyungwe Forest National Park is 225km from Kigali and it takes 5 hours, crossing Huye town, which is about 32km from Kigali. The road up is quite smooth but has some very sharp turns so your driver should be careful.

En-route they are several interesting sights along the way that you can enjoy. You could stop at the Nyanza king’s palace at Nyabisindi and the Gikongoro’s Genocide Memorial along the way.

Flying to the park reduces your time on the road is less tiring, RwandAir offers a minimum of 9 flights a week from Kigali to Kamembe International airport and then drive 32km to Nyungwe Forest National Park.

Climate and when to visit

Nyungwe Forest National Park has a pleasant climate with the best months to visit Nyungwe during the long dry season that lasts from June to September or during the short dry season from mid-December to mid-February.

Though you can expect some showers during the short season, as it falls in between the two rainy seasons, during the wet seasons from February to May, when the long rains fall, or from October to mid-December, during the short rains, may make it easier to locate the primates; however, treks are often challenging due to wet mud.