Rwanda’s Gorillas in The Mist

The captivating Rwanda’s gorillas in the mist

Thanks to the incredible work of Dian Fossey and other global conservationists, Rwanda’s mountain gorillas have captured the hearts and minds of people around the world. If seeing these gentle creatures in the wild is your ultimate travel dream, tour their natural habitat in Rwanda’s Volcanoes National Park.

Efforts to protect mountain gorillas from the effects of habitat destruction, poaching, and other threats have led to the creation of an amazing infrastructure that provides the privacy and support the gorillas need to not only survive in the modern world, but thrive for generations to come. The Rwandan government restricts the number of visitors who are allowed to view the gorillas, and this means that securing your premium spot for a mountain gorilla trekking trip is a privilege few people experience.

Estimates indicate that approximately half of the mountain gorillas in the world live in the Virunga Mountains, part of the Volcanoes National Park, so your primate trek through the montane forests will be rewarded with an hour of watching the gorillas engage in natural behaviors.

The heartwarming Rwanda gorilla trekking scene will highlight the close bonds between the members of the gorilla family, as well as the playful antics of gorilla infants. The presence of a powerful silverback will stir your emotions as he sits quietly, ever watchful of his family, with a gentle nature that makes human onlookers feel connected in an unexpected way.

Participating in gorilla trekking in Volcanoes National Park jungle requires a great deal of coordination, as relatively limited permits are issued each day. Working with Scenic Trail Safaris to arrange your mountain gorilla trekking and other Rwanda Safaris Activities helps to ensure that you will have a captivating experience with these creatures.

We work with you to create a personal travel schedule that fits your needs. Every detail is taken care of by your Scenic Trail consultant, including acquiring the necessary gorilla permit (costing $1500 per person currently) for your mountain gorilla safari to all the logistics of the trek day. 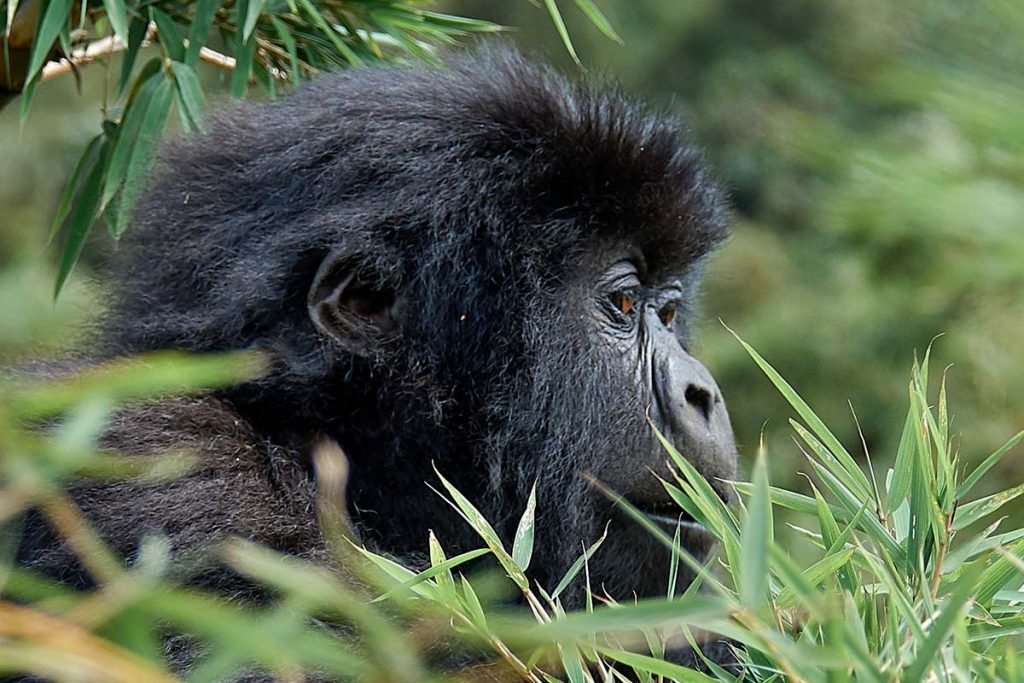 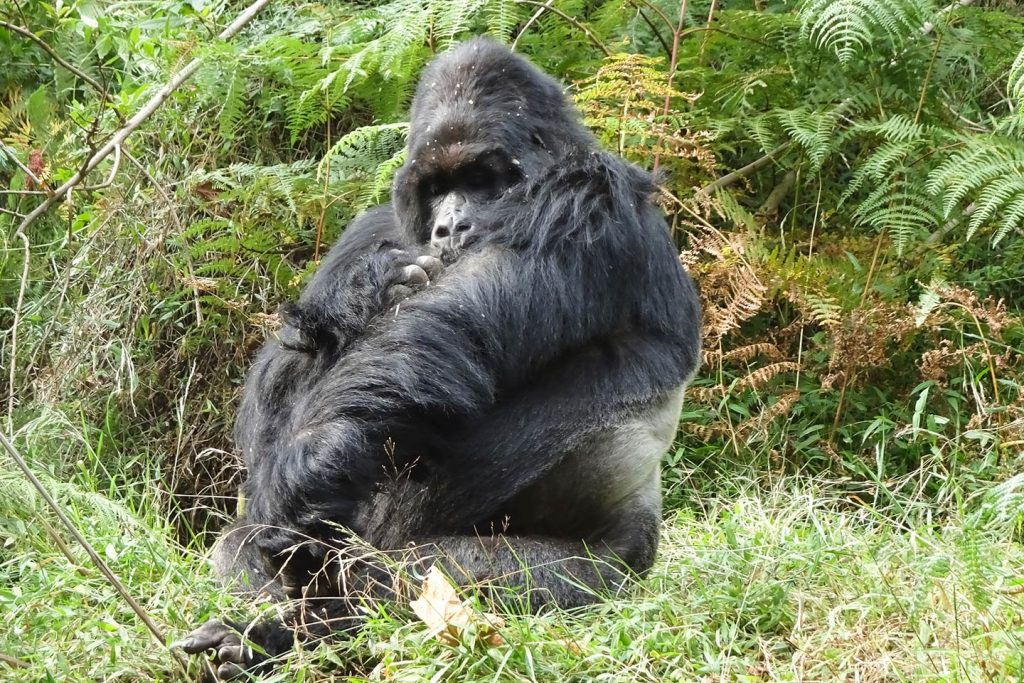 Dian Fossey told the world how mountain gorillas live, and fought tooth and nail to save them. Her obsession may have led to her mysterious death but we’re now able to visit with these gentle creatures because of her.

It is now 30 years to the day since the mysterious death of Dian Fossey, the primatologist who transformed the way we see gorillas.

Before Fossey’s work, gorillas had an appalling reputation as violent brutes that would kill a human on sight. Fossey demolished this myth. Living alongside a group of mountain gorillas in the forests of Rwanda, she showed that these huge apes are actually gentle giants, with individual personalities and rich social lives. In many ways they are like us.

But the mountain gorillas were also in terminal decline, their habitats encroached on by farms and overrun by war and civil unrest. Fossey spent her last years fighting an increasingly savage battle to save them, until she finally lost her life in 1985.

“It amazes me to think of a woman setting off into a forest in a foreign country in the 1960s on her own,” says Tara Stoinski.  “She wasn’t even trained as a scientist at the time,” Stoinski adds. “But she uprooted her life to go study an animal, which was perceived as this big, scary beast, like King Kong. She changed the trajectory for that species.” 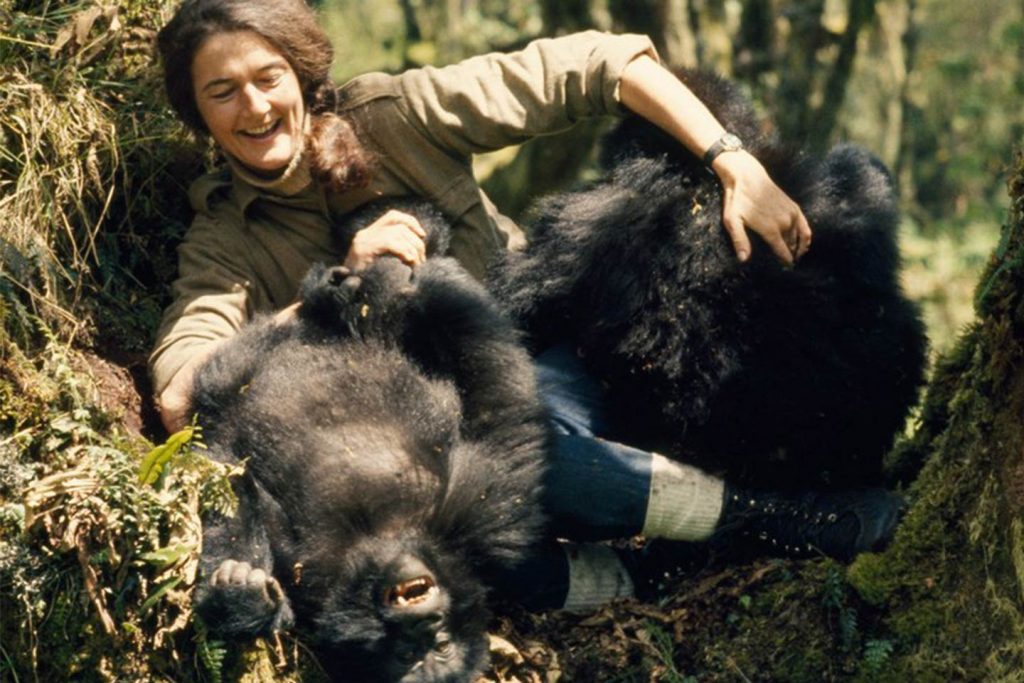 Stoinski is the president, CEO, and chief scientific officer of the Dian Fossey Gorilla Fund, who often gives visitors a tour through the re-creation of the original Karisoke Research Centre, Fossey’s former home and research base, which was started in the Volcanoes National Park in 1967. Today, the Karisoke Research Centre (which has relocated to a bright-white building in Musanze, Rwanda) still serves as a research base and the headquarters for the Dian Fossey Gorilla Fund. Inside, there is also a museum that pays homage to Fossey’s key findings and showcases items from her former home and work base.

Without Fossey’s aggressive work, for which she dedicated her life to studying and protecting gorillas, it’s almost unquestionable that they’d be extinct. The gorilla population is still at risk, but when Fossey first moved to Rwanda, they were under even greater threat. “To go on your own to a place like Rwanda — which was fairly unknown to many Americans at the time — and live by yourself at 10,000 feet in really harsh climatic conditions to study these animals is really amazing,” Stoinski says. “And then, to face the challenges with the poaching of gorillas — that’s emotionally devastating.”

Thanks to Dian Fossey and the conservation efforts of the three nation where the gorillas are found and those all over the world we can come face to face with the gorillas 10,000 ft up in their natural habitat. When you finalyy meet with these beautiful creatures, suddenly, everything melts away, and it’s impossibly easy to see why Fossey did what she did: you’ll watch how they move, curious but largely unfazed by your presence. They pick at shrubs and tumble in the vegetation. At one point, an inquisitive baby rolls over to visitors feet and stares into your eyes, you’ll feel like almost willing me to play with it — just like a small child would. And that, Scenic Trail Ventures can take you to. Enquire now!.

Tourist Activities To Do in Rwanda 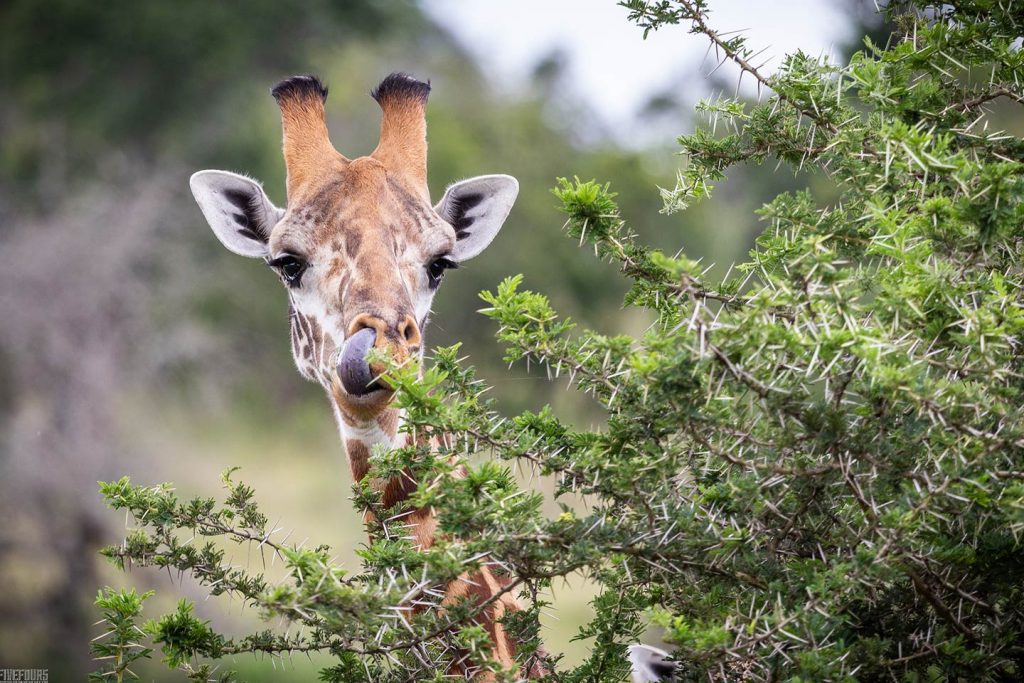 Tacked away between Uganda, Tanzania and Congo, this tiny country gives away more than you expect. Untill recently you can drive through Akagera National park and see all the big 5 game animals.
Read More 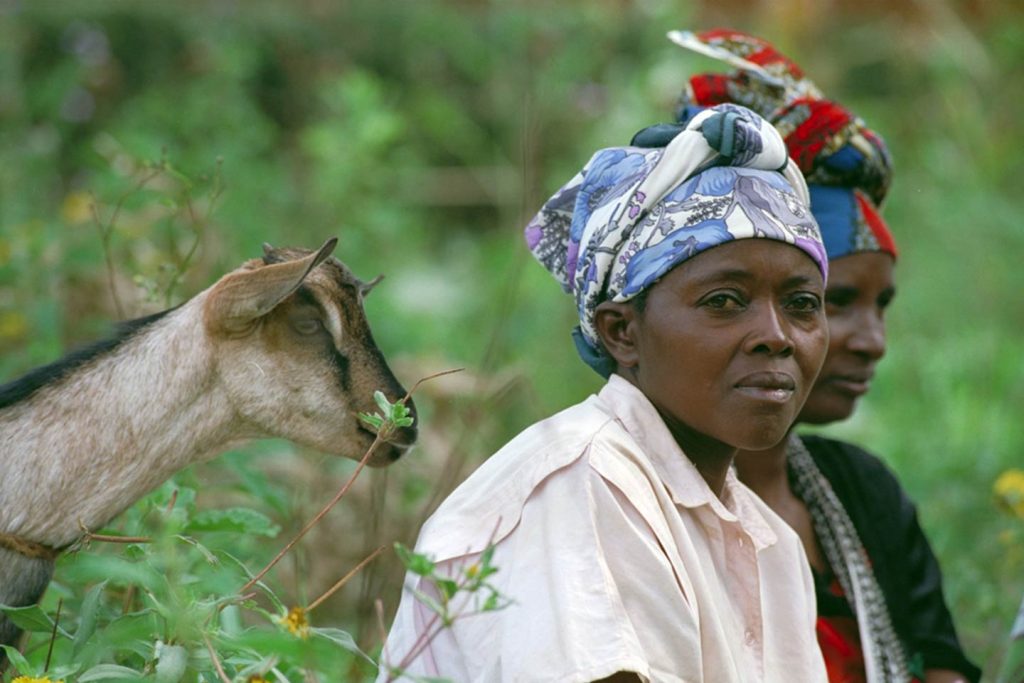 Rwanda is bubbling over with culture rich and diverse culture which spans centuries: 4 languages, countless customs and traditions, uplifting music and dance can be encountered all around the country.
Read More 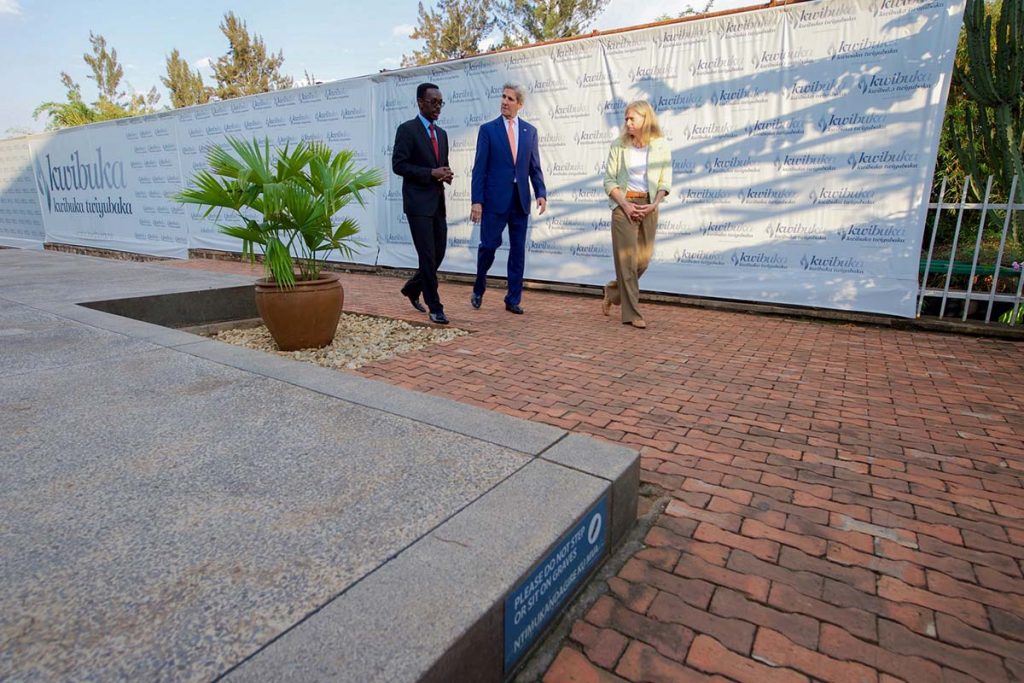 Rwanda’s 1994 Genocide left a lot of wounds to nurse for the Rwanda people but have healed amazingly building structures and sites for those that want to come have a revisionist history. We take you there.

Surrounded by phenomenal volcanic landscapes, wildlife that many of you grew up dreaming of seeing with your own eyes, and some of the continent’s most friendly, welcoming people making you feel like a VIP wherever you go – being in Rwanda can feel like such a privilege. Rwanda really gives visitors all it can, and as guests we really should try to repay this kindness in some way.

Most tourism in Rwanda takes place in its national parks with official guides – which shuts local residents and businesses out. But by looking beyond the parks, even for just a couple of days of your holiday, your money will go much further, and you’ll completely shift your opinion of Rwanda as a place to see wildlife. Rwanda’s people are every bit as fascinating.

Equatorial Rwanda has a blissful springlike climate – a 25oC with cooling night time breezes perfect for an African Safari night.

Rwanda sits squarely a few kilometers bellow the equator with an average altitude of around 1,000m, which tempers the heat and means this really is a year-round African safari destination. March-May and Oct-Nov see the highest rainfall, but gorillas are still lurking in the mist – although trekking to find them will be slippery and slower. However, accommodation can be much cheaper at this time. The best time to visit Rwanda is June-Sep, which is the peak season – but Uganda remains happily oblivious to mass tourism and you won’t need to worry about crowds.

If you’re researching when to go to Rwanda then the chances are that it’s for a gorilla trekking adventure. Although it’s regarded as a year-round activity, the best time to visit Rwanda for a gorilla trek is during the short dry season from mid-December to early February or over the long dry season months of June to September. These periods offer by far the easiest hiking conditions and the lowest malaria risk.

From January 2018 citizens from all nations (no longer just those from Australia, Germany, Israel, New Zealand, South Africa, Sweden, the UK and the USA) can automatically receive visas on arrival at Kigali International airport and all land borders.

Rwanda Gorillas in The Mist

Thanks to the incredible work of Dian Fossey and other global conservationists, Rwanda’s mountain gorillas have captured the hearts and minds of people around the world. If seeing these gentle creatures in the wild is your ultimate travel dream, tour their natural habitat in Rwanda’s Volcanoes National Park.

Expert Knowledge:
We have specialised in Uganda since 2007. Each consultant knows the country backwards, ask us anything!

Transparent pricing:
We offer a cost breakdown with all quotes and are able to beat any quote from a reputable US or UK travel company.

Read more about us

Reviews
People have been reviewing us positively for 10 years and we recently partnered with TripAdvisor.