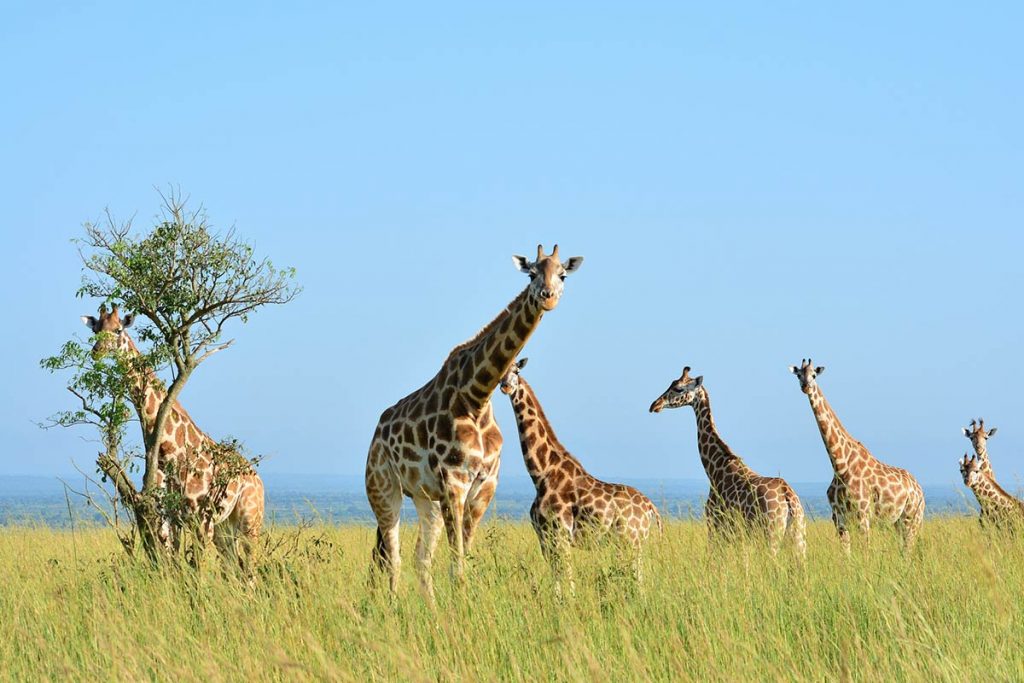 Akagera National Park is set at a relatively low altitude on the border with Tanzania and is characterized by sweeping grasslands and rugged acacia woodland, interspersed with a labyrinth of swamps and lakes that follow the Akagera River, the most remote source of the Nile. This breath-taking landscape is an exhilarating change from the magnificent rainforests that dominate most of Rwanda.

Akagera National Park provides a real eye opener to the wonders of the flora and fauna of the African bush land, with herds of elephant and buffalo emerging from the woodland to drink at the lakes. An observant visitor may also spot a stealthy leopard, hyena or pride of lions resting in the cool shade provided by the feral acacia trees.
The Park is central Africa’s largest protected wetland and the last remaining refuge for savanna-adapted species in Rwanda with a rich bio diversity.

Located in the north east of Rwanda along the border with Tanzania at a size of 1,122 sq. km, Akagera National Park gets its name from the Akagera River that flows along its eastern boundary and feeds into a labyrinth of lakes of which the largest is Lake Ihema. The forest fringed lakes, papyrus swamps, savannah plains and rolling highlands combine to make Akagera National Park.

Akagera National Park is almost bursting with more than a dozen species of antelope, most commonly the handsome, regal impala, but also oribi, bushbuck, tsessebe and the world’s largest antelope, the striking Cape eland are resident within the park.This breath-taking landscape is every nature lover’s wildest dream and is home to a number of rare species, such as the shoebill stork with more than 12,000 large mammals and 482 bird species, including many large plains game species as well as species restricted to the papyrus swamps such as the Sitatunga and the sought-after Shoebill Stork.
Notable plains game in Akagera National Park include elephant, buffalo, topi, zebra, waterbuck, roan antelope and eland. Other antelope are duiker, oribi, bohor reedbuck, klipspringer, bushbuck and impala. Of the primates, olive baboons, vervets and the secretive blue monkey are seen during the day, with bushbabies often seen on night drives.

Akagera National Park features a range of swamp fringing lakes supporting a whole range of aquatic thriving fauna. The range of lakes include the Rwanda’s second largest Lake Ihema, the beautiful Lake Shakani known for its counts of fish, Lake Gishanju, Lake Rwanyakizinga along with Lake Mihindi. These water masses support aquatics like the concentration of Hippos, the second largest Reptile in the world – Nile crocodile and great counts of fish.

The Park is traversed by River Akagera which flows along its eastern boundary before penetrating Tanzania and Uganda.

In Akagera National park game drives are a very prominent activity carried out due to the many tracks around the park that are usually followed so as to view wild life species like buffalo, elephants, hippos, zebra, crocodiles, giraffe, hyena, leopards, lions, antelopes, birds, bush baby etc. While on a game drive, one can also view the beautiful rolling hills merging along the scenic lowland water bodies and swamps.

Birding Enthisiasts that visit Akagera National Park are always impressed by what they find mostly the many bird species that range from water to forest and also savannah as well as the migratory bird species and many of these are endemic to the park and are so rare like the papyrus gonolex which is found in the papyrus swamps.

Boat cruises are done on Lake Ihema where you will spot a variety of hippos and crocodiles moving within the water as well as other wildlife animals like the buffalo, elephants that are usually relocating from their habitats (bush) to the Lake for water especially in the mornings, afternoon and evenings. While here you will also spot water birds like the shoe bill stork, heron, malachite kingfisher, fish eagles, papyrus gonolek etc.

With personnel fishing equipment and a valid permit, one can take on Sport fishing an exciting activity that will make the entire holiday very exceptional and extraordinary in Rwanda. The most prominent fish caught is the Tilapia due to their massive numbers in the waters.

On a Nocturnal game drives, you will enjoy thrilling views as you adventure out with a spot light to view the wildlife creatures of the night that are found in the Safari Park. This night game drive through the park is different from that of during the day since at night, there is a big opportunity to view the predators on the prowl as they look for dinner. You will also see a few leopards, lions, civets, serval cats, the hyenas, birds as well as the bush babies. This drive takes 2 hours and will surely give you a different perspective altogether.

How to get to Akagera National Park

Akagera National Park is 135km from Kigali city and it takes 2 ½ hour to get there. From Kigali head east to Rwamagana and then to Kayonza and continue for another 15 kms to Kabarondo where the Kayonza gate is 28km until when you reach Kayonza gate.

Akagera Aviation if the major aviation company that offers flights to all the different national parks in Rwanda. They use helicopters for small groups to fly to these destinations and it only takes 22 minutes to get to Akagera.

Climate and when to visit Akagera National Park

The Park has two dry seasons with the long dry season running from June through September and it is the best time to visit and from mid-December to mid-February which is convenient for game viewing. During the wet season, the park is stunningly beautiful with the lush new growth of the flora