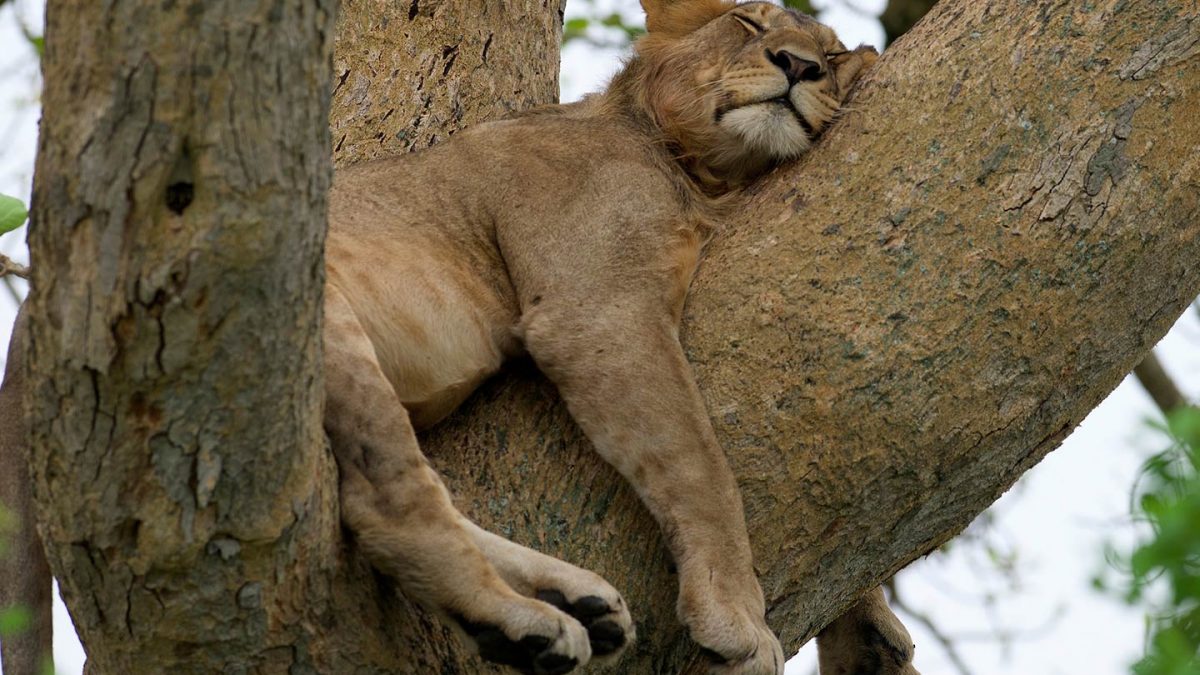 Somewhat off the beaten track in the far southern sector of the park, Ishasha is famous for its population of tree climbing lions. It’s one of the few places in Africa where lions are known to hang out in trees (you’ll find them in Kidepo National Park too) and are often found lazing on the sprawling limbs of fig trees during the heat of the day. Generally the best time to spot them is outside the usual safari drive times (11am to 5pm, basically when they’re not hunting). If it’s wet, the lions generally won’t climb.

The other population of the elusive tree climbing lions can be spotted around Lake Manyara Game Reserve in Southern Tanzania. Both of this countries are in East Africa, although there have been a few sightings on a South Africa safari of the lions in Kruger National Park exhibiting a similar affinity towards tree.

The phrase ‘tree climbing lions’ seems a little bizarre to those who have never seen this unusual behaviour. Even seasoned animal behaviorists agree that lions are not evolutionarily adapted to scale trees and perch atop branches. In fact, this phenomenon is so rare that there are only two documented populations of tree climbing lions on the planet have been noted.

While a leopard sleeping lazily in the tree tops is a common sight on safari in the bush, this strange behaviour exhibited by lions has been the subject of interest and wonder.

Lions are believed to climb trees as a behavioral adaptation to protecting themselves from the constant irritation insect bites while lazing on the ground under trees. Some animal behaviorists claim that these lions have perfected the art of climbing trees as a way of escaping the sweltering heat on ground level. This way, they can enjoy a cool breeze and blissful nap without worrying about the happenings on the ground. Moreover, this position is an excellent vantage point from which to observe the movement of prey as they cross the plains in search of grazing opportunities and water.

While lions are not physically adapted to climbing trees, these distinct groups have been able to master this skill over time and teach their young to do the same; a great example of learned behaviour as opposed to natural instinct. Lions can weigh between 250 to 400 pounds so it’s no easy feat to lug their bodies up such heights.

Scientists in Uganda studying the behaviors of the country’s famous tree climbing lions have found that the home ranges of lion prides in the study areas have increased over time as they search farther for diminishing numbers of prey animals.

Overall, the home range sizes of tree climbing lions in Ishasha are smaller in size (between 35 and 43 square kilometers) than the ranges of lions in places such as Serengeti National Park, where lion home ranges can extend up to 400 square kilometers.

The smaller ranges of the tree climbing lions, along with their preference for grassland and wooded grassland habitat are related to their dependence on their main prey species, the Ugandan kob. Averaging slightly over 100 pounds, Ugandan kob are known for their distinctive lekking behavior, with males staking out prime patches of territory to attract females.

The smaller lion pride size due to fewer prey numbers likely has another impact on the ability of lions to hunt larger, more challenging prey. One such prey species is the Cape buffalo. Whereas lions in other areas often prey on buffalo, one of the larger prey species for lions, the big cats in Ishasha tended to avoid buffalo, probably as a result of fewer lions in each pride to help bring the big herbivores down.

“The tree climbing lions of Ishasha are an important ecotourism draw for the country, yet these big cats are starting to decline in number,” said Simon Nampindo, Director of WCS’s Uganda Program. “One way to ensure a future for lions in Uganda would be to invest in increasing prey density in Queen Elizabeth National Park while protecting the important grassland and open woodland habitat that the lions rely upon.”

How you can see these amazing animals

A visit to Ishasha In Uganda will not only reward you with the scenic views of the picturesque landscape but also with a chance to stumble upon the population of the exceptional tree climbing lions. For example, in Ishasha, the lions can be seen atop huge fig tree branches as they keenly a herd of peacefully grazing antelopes, gazelles, and impalas. These herbivores form the main prey of these tree-loving lions.

If you’re lucky enough, you may catch the rare spectacle of a lion gingerly and carefully moving around a tree branch before pouncing on the ground. The awkward, almost unnatural hesitance which it exhibits is in sharp contrast to the flawless agility and ease that a leopard’s movements demonstrate.

Whether these lions choose to climb the trees to get a panoramic view of the surrounding escarpments in Ishasha and Manyara or do so to avoid the irritation from ground level bugs such as the tsetse flies, one thing remains clear. The art of effectively scaling trees – especially for older lions – calls for a measure of effort, constant practice and excellent arboreal mastery. Fortunately, like any skill that is hard to perfect, the more these lions climb the trees, the more adept they become at it.